There is good news for yacht owners with an older generation stabilisation system on board. With DMS Holland’s new universal stabilisation control system, known as the U-S-B, a somewhat dated roll damping system is now easy to upgrade and can still be used for years to come.

This is the all-in-one solution to a frequently occurring problem in the yachting world. Most yachts that have been around for a long time also have contemporary stabilising systems. When these systems malfunction, spare parts are very hard or impossible to find and changing the whole system is very expensive.

Often the hardware components of these older stabilisation systems, such as the fins or the mechanical/hydraulic parts, are still in good condition and it is the control system itself that is dated and causes malfunction. That old control system is often, for example, the then revolutionary FAL124, a 19-inch rack with buttons and lights, produced by the former Koopnautic. It is made up of many proprietary parts that are no longer available and can no longer be repaired. To replace all mechanics/hydraulics because of a defective control system is nonsense and a total waste of resources and existing investment.

DMS Holland replaces the defect control system with a modern digital control system equipped with state-of-the-art technology such as a CAN bus system, a colour touch screen panel and an electronic controller featuring ingenious stabilisation algorithms. The system is built to a high-quality but using standard industrial components so that availability and service will not be a problem in the future.

The U-S-B gives yacht owners the opportunity to keep most of their current system in place but to change the control section. This radically reduces the costs of fixing the stabilising system on a yacht. 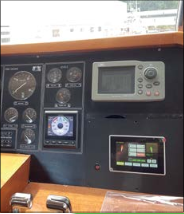 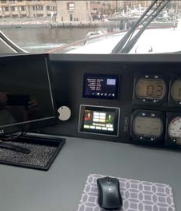