Low Speed Stabilisers for yachts up to 30 meter and speed between 3 and 12 knots.

The Magnus Master is the new generation rotor stabilizer. Advanced, high-end technology based on a universal law of nature: the Magnus effect. Discovered and documented by Heinrich Gustav Magnus.

MagnusMaster is a fully electrically driven, non-hydraulic roll damping system for yachts up to 30 metres based on the Magnus effect. Instead of traditional fins, the system uses rapidly rotating cylinders which, subject to the direction of rotation, generate an up or downward pressure. 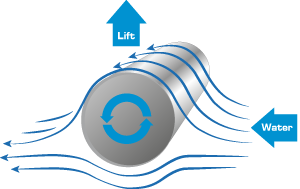 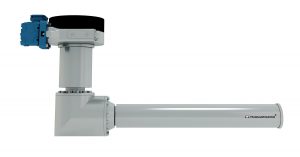 The biggest advantage of a rotor system in comparison to a fin driven conventional system, is the greater roll damping at lower speeds. To achieve effective roll damping with fins it is necessary to reach a substantial speed through the water. This is partly due to the fact that often, the surface of the fins have been designed to be as small as possible to reduce the risk of damage. In shallow water, protruding fins are, in particular, very vulnerable.

MagnusMaster features retractable rotors, eliminating the risk of damage. The retracted rotors remain largely within the turbulent boundary layer of the vessel so that any resistance is negligible.

If the rotors are in use in the “Drive” position, they can protrude outside the hull of the ship. However, should the engine be put in to neutral, the rotors automatically retract. This prevents damage during maneuvering and berthing at quays, in locks and ports.

The rotors do not have any effect on the steering and therefore, unlike fin based systems, can be mounted at a position of choice. For the majority of yachts, this is likely to be dictated by the onboard available space for the compact electric motor. It is even possible to mount the rotor at the stern which, in particular for fast-moving yachts, may be preferable.

The new DMS rotor system is maintenance free The system is much more compact than simualar systems and the installation height is reduced Manual operation is much more user friendly than simular systems The system has a very user friendly control system with extensive diagnostic capabilities A colour touchscreen has been added It has a robust communication system via CANbus system Professional wiring and cabling, both internally and externally